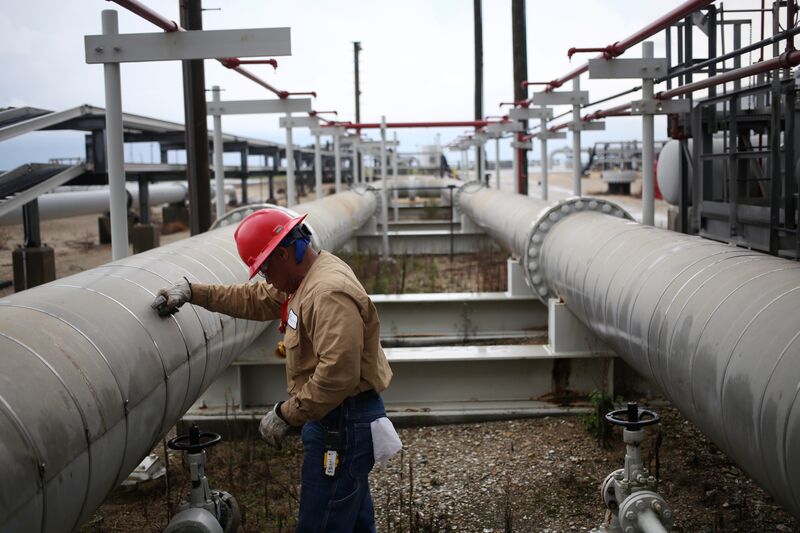 ***
Trump Tariffs Are a Gift for OPEC and Russia. Not Shale
Domestic production is nowhere near able to replace imports for pipelines.
Luke Sharrett/Bloomberg
President Donald Trump's planned 25 percent import tariff on steel is a gift to OPEC and Russia.
His announcement last week will surely play well in steel towns, as its aim is to protect American producers from "unfair" competition from cheaper foreign suppliers. However, it will inevitably drive up costs for the nation's oil and gas producers. And that could be bad news for the resurgent shale industry, which has set the U.S. on the road to becoming the world's top oil producer.
Steel used in oil pipelines has to meet rigorous technical specifications to ensure it doesn't corrode or fracture during a lifetime that may well exceed 30 years -- far longer than that of a domestic appliance or an automobile.
But the market is a small one for steel makers, accounting for just 3 percent of the U.S. total, according to the Association of Oil Pipelines, a trade group that represents the interests of owners and operators. That's even with the surge in domestic oil production. U.S. steel makers have largely abandoned this niche market in favor of higher volume products with less rigorous quality specifications.
A study conducted by consultants ICT International on behalf of five pipeline industry bodies found that approximately 77 percent of the steel used in line pipe in recent years was imported, either in the form of finished pipe or the raw material used to fabricate it in the U.S. (The report also noted that while the U.S. imports $2.2 billion of steel products related to line pipe from 29 countries, it exports steel and steel products worth five times as much to those same 29 nations).
So the higher cost of imported product is unlikely to generate a surge of new domestic supply. Once Trump's tariff becomes law, pipeline companies will see the cost of the steel they need go up -- unless they get an exception. If not, then they'll inevitably pass on higher prices to the oil and gas producers who use their lines.
A 25 percent increase in the cost of imported line pipe, fittings and valves would raise the cost of a 280-mile oil pipeline -- typical of those needed to carry shale oil from the Permian Basin to the Gulf coast -- by $76 million. For a mega-project, like the Dakota Access pipeline, also championed by President Trump, the cost increase could be as much as $300 million.
The new levy isn't even in place yet, and already it is drawing howls of complaint from some of the very sectors of U.S. industry Trump has pledged to protect. The extra expense would lead to the delay or cancellation of pipeline projects, and "end up hurting American workers denied construction and contracting jobs," according to AOPL.

The shale industry is already facing the prospect of pipeline bottlenecks hampering output growth. Further obstacles to pipeline construction would hurt jobs in the oil patch, too.
It is difficult to see who will benefit from an import tariff on a grade of steel that American industry cannot, or will not, make in sufficient quantity to meet domestic needs.
But it's easy to see one result -- U.S. oil output growth will slow. The latest forecast from the Department of Energy sees U.S. production topping 11 million barrels a day by November and growing further next year. But that will depend, in part, on the ability of producers to get their product to market and, increasingly, that means to export terminals on the Gulf coast. For that they will need more pipelines. A one-quarter increase in the cost of building them can only stymie the industry's expansion.
The biggest winners of this would be Russia, currently the world's largest producer, and OPEC. They have watched in despair as their efforts to restrict their own supply to bolster oil prices have been rewarded with a renewed surge in American production. To now see a president elected to "Make America Great Again" potentially undermining that growth will bring a cheer to hearts in Moscow, Tehran and Caracas. And that is surely not what the president intends.
ссылка
Tags: США, нефть
Subscribe
promo