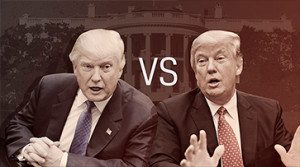 Since he took office, President Trump has been sowing confusion about where he stands on issues of major importance to the global economy.
He was against a border tax -- then praised it. He criticized the European Union -- then said he was "totally in favor of it."

Trump has also contradicted remarks by the most senior members of his administration. Observers are taking note.

Investors, too, are struggling to interpret the U.S. president. A survey published last week by Oxford Economics found that they view Trump as the biggest risk to the global economy. At the same time, they said his policies may also represent the single largest potential boost to growth.

Here's a look at where the confusion lies:

President Trump, Nov. 9, 2015: "On day one of a Trump administration, the U.S. Treasury Department will designate China a currency manipulator."

Treasury Sec. Steven Mnuchin, Feb. 23, 2017: "We have a process within Treasury where we go through and look at currency manipulation across the board. And we'll go through that process. We'll do that as we have in the past, and we're not making any judgments until we continue that process."

President Trump, Feb. 24, 2017: "I think they're grand champions at manipulation of currency."

Sec. of Homeland Security John Kelly, Feb. 23, 2017: "This dynamic trade relationship has also helped create millions of jobs on both sides of the border. The relationship between the United States and Mexico is among, I believe, the most critical in the world."

President Trump, Jan. 16, 2017: "Anytime I hear border adjustment, I don't love it. Because usually it means we're going to get adjusted into a bad deal. That's what happens."

President Trump, Jan. 14, 2017: "If you get along and if Russia is really helping us, why would anybody have sanctions if somebody's doing some really great things?"

UN ambassador Nikki Haley, Feb. 3, 2017: "The United States continues to condemn and call for an immediate end to the Russian occupation of Crimea. Crimea is a part of Ukraine. Our Crimea-related sanctions will remain in place until Russia returns control over the peninsula to Ukraine."